In the past two years more than 90 percent of the projects Jubilee Fund has seen, have in one way or another been related to affordable housing.

There is no doubt that housing is a top priority issue not only in Winnipeg and throughout Manitoba, but across Canada.

In an effort to reduce the need and seek to address the problem various attempts to measure affordability have been tried and largely have failed.

Some organizations have sought to measure affordability as a set percentage below market value. The obvious problem with this method is when average market rental rates for a 2-bedroom apartment are well over $2,000 per month, affordability is lost. If you knock the rent down by 15 percent and consider this affordable, a renter is still paying $1,700 per month.

So in order to qualify and pay $1,700 for an “affordable” 2-bedroom rental apartment a person needs an income of $61,000 per year assuming we do not want them spending more than 33 percent of that income on rent.

I mention 3-bedroom apartments because families with children pay a premium for living space. I would also mention that the word “safe” is conspicuously absent so far. That’s because these averages are for all apartments available, safe or not.

In reality most of what government bodies and NGOs define as “affordable” housing is simply not.

A real measure of affordability is very specific to individuals and circumstance.

For instance what can a single mom of four children making $15,000 afford to pay for rent? According to the 33 percent method she can afford $412.50 per month.

I raise this particular scenario because this was my mom. She had an income level at or below $15,000 per year while raising four children on her own. As a result housing was always substandard and unsafe. It was also incredible unstable. We moved on average about once or twice a year.

Once mom qualified for government housing, we found affordability, safety and stability. I was 13 years old when this finally happened. This was a four-bedroom duplex with a fenced back yard. Such a home would be pushing $2,000 per month rent in Winnipeg – far outside of the reach of someone like my mom who would need to earn $72,000 per year to fit rent within 33 percent of income.

So what’s the solution? Well recognizing that the housing market and prices are driven by supply and demand it is clear that in Winnipeg, Manitoba and across Canada there is a supply issue. Not enough supply to meet demand.

Increasing supply should temper prices somewhat. Of course the issue then becomes cost to build and margins. Developers cannot build properties for less than the cost of materials, at least not in the quantities and at speeds necessary to affect the issue.

Government has proven on multiple occasions and in a myriad of jurisdictions to be wildly incapable of acting as developer and property manager for such housing. This is because government is not a market-driven organization. Often the costs associated with government built projects are higher, sometimes substantially, than the same projects build and managed by the private and non-profit sectors. Wait times to access government housing are measured in years – not days, weeks or months. 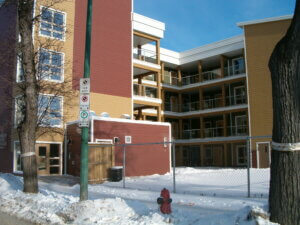 It is also worth noting that as prices to build is pressured to be reduced, what is sacrificed is quality and safety. Materials become cheaper; homes become less environmentally sound and thus costs to the tenant in terms of heating and cooling increases, and maintenance costs/life of the build become unsustainable and generally shorter.

In order to guarantee supply, developers need to be able to meet costs and margins which means we need to find ways to ensure rental subsidies continue and grow. This allows for market rates to be paid.

These are areas where government can be most successful and have the most impact – by proxy through policy, funding and financing allowing the private and non-profit sectors do what they do best.

Jubilee Fund’s work in offering loan guarantees and loans to support affordable housing development is one part of the solution. Additionally our Rent Guarantee Program which, as of 2023 supports not only at-risk women but youth-coming-out-of-care, newcomers and the previously incarcerated, helps to remove barriers of prejudice to accessing safe, affordable housing.

Here’s hoping 2023 is the year that sees substantial headway made in creating truly affordable housing options to those with the greatest need…as always, Jubilee Fund will be here to help.

Author: Peter Cantelon, Executive Director Fragile. Self-centered. Unrealistic. Just some of the criticism leveled at Generation Z. For those of you not keeping track Generation Z are the people born between the mid-90s to early 2010s. They are generally the children of Generation X (my generation). Between Gen X and Gen Z are the Millennials… END_OF_DOCUMENT_TOKEN_TO_BE_REPLACED