Value(s): Building a Better World for All – Jubilee Fund

“Capitalism loses its sense of moderation when the belief in the power of the market enters the realm of faith.” 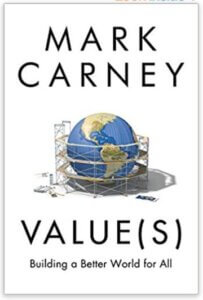 So says Mark Carney about a third of the way through his new book Value(s): Building a Better World for All. You know, the former governor of the Bank of Canada and the Bank of England…that Mark Carney.

Have you ever wanted to read a book about global finance, the markets and the source of value? Of course not, but I am here to tell you that you need to put down that Dan Brown novel because, whether you know it or not, this is the book for you and it is timely and important.

The above quote is as good as any to sum up Carney’s motivation and message behind his new tome. Something is rotten in the state of Denmark…and every other state on the planet. That something has to do with changing human values and its link to the global market economy, injustice, inequality and climate change.

Stop yawning, this is all actually very compelling despite your views on economics. Carney will deftly compel you to a position where you come to understand that morality, ethics and social investment are not simply nice, conscience assuaging things to tinker with at the fringe of finance but rather the core of our future and the key to humanity’s survival. If you already held that position than Carney will give you the expert analysis you need to compel others along the same path.

When you pick up the book and notice it runs 600 pages (including index) you may be tempted to immediately put it down and run screaming back to the comfort of the internet but I would encourage you not to. This is an important work and the more you read it the more you want to read it.

Carney brings a lifetime of financial experience, 12 years in his roles as governor, a prodigious intellect and a surprising writing ability to bear in his new book.

In this book Carney argues that the market, once derived from and reflective of the best of humanity, has twisted and distilled itself into pure self-interest. In doing so it has lost sight of its source and rather than being defined by our best natures the market is redefining that source to our own peril. Carney outlines how we can rescue ourselves from the monster we created and “channel the value of the market back into the values of humanity.”

Whew. This is heady stuff that might frighten the reader but somehow Carney weaves a compelling thesis combining prescient knowledge, history and skill that makes the book difficult to put down.

Carney’s warning and argument are spread across three main parts – Part I: The Rise of the Market Society is a majestic and sweeping history of value and economics that spans thousands of years of human commerce seeking to ground the reader in the basics so that the argument can be understood and, hopefully to Carney, agreed with. It is a “how did we get to where we are now” sort of exposition.

Part II: Three Crises of Value(s) continues the story into the present, reinforcing the themes of Part 1 and presenting brilliant overviews of three key events in modern financial history – the global financial crisis (the recent past); the Covid crisis (the present as I write this review); and the Climate crisis (the current existential threat and future).

Carney’s aim is not to leave the reader floundering in grief and depression at the absolute hopelessness of things however. Like any good pragmatist, he wants the reader to understand the importance of the threats we face and how the market, when it returns to serving humanity instead of the other way around, can help rescue us.

We have now been led to Part III: Reclaiming our Values wherein Carney speaks to the importance of values-based leadership, companies of purpose creating value that is defined beyond the shareholder and values-based investment.

Carney is not an iconoclast calling for the destruction of all that came before in favour of something new. He is not calling for a revolution. Rather he is calling for a correction of substance and laying out how this can happen.

Throughout the journey of this book, we see how the concept of value and the market, once servants of humanity became our gods and thus contributed to injustice and inequality. But we are presented with the hope of a roadmap back to place where the market is reforged into a tool of humanity to serve lasting purposes of true value, what Carney describes as “the trinity of distributive justice, equality of opportunity and fairness across generations.”

I have no doubt the book will be read for years to come and likely fall into a place as a classic amongst the varying tomes on economics if not one of the most accessible and compelling.

If you rank themes of social impact and justice in investment and finance as important to you, if climate change and inequality weigh on you – this is a must-read book (and even if they don’t, it still is).

Author: Peter Cantelon, Executive Director Fragile. Self-centered. Unrealistic. Just some of the criticism leveled at Generation Z. For those of you not keeping track Generation Z are the people born between the mid-90s to early 2010s. They are generally the children of Generation X (my generation). Between Gen X and Gen Z are the Millennials… END_OF_DOCUMENT_TOKEN_TO_BE_REPLACED