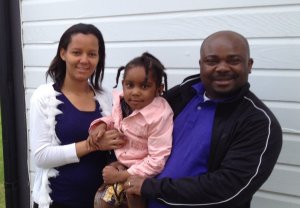 Jean Nicholas moved to Winnipeg four years ago after spending three years in Quebec. There, he started a hair salon business. After meeting his future wife, Therese, he decided to take a chance and move to Winnipeg to learn English.

After working some minimum wage jobs he was frustrated. He felt like he was spinning his wheels and not getting where he wanted to be to support his growing family. He decided to enroll at the Université de St. Boniface, where he earned his Bachelor Degree in Sociology with a minor in Business Administration. To further prepare him for his dream of owning a business in Canada, he connected with SEED Winnipeg and completed the Build a Business Program.

Armed with his business plan, some contacts and plenty of enthusiasm, he ran into a financing roadblock. He had no credit and no way to build it. For many new Canadians, the degree to which credit governs lives and opportunities in Canada is a shock. Jean Nicholas had no debt, but he also had no assets to leverage.

He investigated several self-employment opportunities, including starting a cleaning company, but again ran into the problem of no assets and no equity to capitalize the business. Each day he would spend time searching the internet, asking friends and visiting newcomer organizations as he looked for a solution to his financing dilemma. Then one day he received a phone call from someone at Jubilee Fund in response to one of the many emails he had sent to organizations in hopes of bridging his financing gap.

With his new understanding of how business is done in Winnipeg, Jean Nicholas was on his way. He investigated several cleaning franchise companies and decided that Jani-King had the best start-up plan. Jean was able to open his Jani-King franchise in 2011 through a loan guarantee made possible by Jubilee Fund investors.

Author: Peter Cantelon, Executive Director Fragile. Self-centered. Unrealistic. Just some of the criticism leveled at Generation Z. For those of you not keeping track Generation Z are the people born between the mid-90s to early 2010s. They are generally the children of Generation X (my generation). Between Gen X and Gen Z are the Millennials… END_OF_DOCUMENT_TOKEN_TO_BE_REPLACED