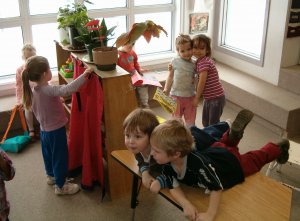 A loan guarantee made possible by Jubilee Fund investors helped ensure a non-profit had a home to provide daycare spaces with flexible hours.

River Area Co-operative Day Nursery Inc. (RACD) was founded in 1974 as a non-profit pre-school child care facility in Winnipeg’s Mayfair “Island Area” near The Forks. It is licensed by the Province, operating as a cooperative and providing both evening and shift care.

Upon hearing the news, RACD formed a committee to look at alternatives. They were successful in obtaining land at 127 Bell Street from the City of Winnipeg for $1, and managed to raise $975,500 ($500,000 from government and community grants, monies set aside by RACD for the project, and a $320,000 mortgage). A loan guarantee made possible by Jubilee Fund investors helped finance construction of a new facility for RACD at a cost $1,256,930. They held their official grand opening in August 2009, continuing to provide much-needed child care for Winnipeg families.

Author: Peter Cantelon, Executive Director Fragile. Self-centered. Unrealistic. Just some of the criticism leveled at Generation Z. For those of you not keeping track Generation Z are the people born between the mid-90s to early 2010s. They are generally the children of Generation X (my generation). Between Gen X and Gen Z are the Millennials… END_OF_DOCUMENT_TOKEN_TO_BE_REPLACED