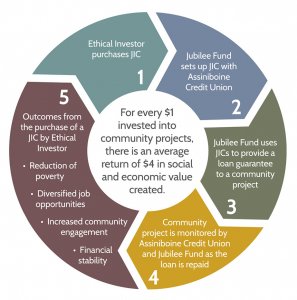 When I was a kid out for Hallowe’en, we carried small cardboard containers (with terrible, easy to rip handles) to collect change for UNICEF. We were agents for ethical investment encouraging our family, friends and neighbors to invest some of their hard-earned dollars into the lives of impoverished children around the world.

Thus mine, and perhaps your personal histories include a history of ethical investment. Maybe it was a carwash to raise money for a family whose house burned down or some other initiative but I bet you have more of a history in this area than you thought.

Tracing the history of ethical investment is a road fraught with twists, turns and potholes. After all the question is “who’s history are we talking about?” and “why this particular history?” etc.

Still, we’ll do our best to try to capture the salient points and craft for you an overview of the practice.

By many accounts the roots of modern ethical investment are situated in 18th century United States and the religious movement known as the Quakers who chose to restrict their members from contributing time and money (aka investing) in the slave trade.

Reality Check – As long as people have been making decisions about where to expend resources there has been a form of ethical investment going on. All decisions involve an ethical framework of one sort or another. What we are looking at here is the history of ethical investment as a modern movement rather than simply a decision.

It makes sense then, to look historically at the world’s religions as a foundation for such a movement given that, by their nature, religions structure an ethical and moral framework affecting decision making.

The Qur’an in Islam, for instance, forbids the payment of interest. Obviously, this creates a unique condition in the world of investment and so finding ways to allow Muslims to invest without breaking this condition (moral and ethical obligation) becomes a form of ethical investment.

In 2010 Assiniboine Credit Union became the first financial institution in Canada to offer mortgages that would not breach this condition. This is a form of ethical investment at work – a way of investing that specifically takes into account the investor’s ethical framework.

Heading back in time again we can see that the establishment of the modern hospital system in the west was due in large part to the expansion of Christianity. Early Christians invested, time energy, money and other resources into their religious/ethical mandate to heal the sick utilizing a model developed by the Roman military.

In the 18th century John Wesley, the founder of the Christian denomination/movement Methodism delivered a sermon entitled The Use of Money in which he handily packaged a Christian’s use of money into three simple axioms – earn, save and give all that you can and do so within a moral and ethical framework (in this instance a Christian one).

More recently with the development of the United Nations’ 17 Sustainable Development Goals, increased awareness of the effects of Climate Change, and broader awareness of poverty and the long-term effects it has on a society we have begin to see large scale adoption of ethical and social investment models.

Financial institutions around the world, sensing a market for ethical investment, combined with younger employees who have a moral drive in this direction, are creating social and ethical investment funds as an outlet for the rising need.

“Now wait a minute,” you say. “Most of what you have been talking about sounds suspiciously like donations and not investment. Shouldn’t investment include some expectation of a return?”

When we turn to the Oxford Dictionary, we note that in its simplest definition investment is defined as “The action or process of investing money for profit.” It is never super helpful when a definition includes a variation of the word it is defining.

A better definition provided would be “an act of devoting time, effort, or energy to a particular undertaking with the expectation of a worthwhile result.” I would add to this “resources”.

In its original form ethical investment was simply you or a group of people committing resources to increase and improve the well-being of others. As market economies developed and matured investment automatically and simplistically focused primarily on the idea of financial return.

Of course, investments that net the investor a charitable donation receipt for tax purposes are also providing a form of financial return as they offset debt to federal and provincial governments.

It is this history that gives rise to organizations like Jubilee Fund. Jubilee is a natural outcome of the history of ethical investment with its focus as an organization that offers financing for poverty reduction and related initiatives Jubilee gives people an opportunity to invest in Jubilee Investment Certificates (like GICs) that are leveraged to provide loan guarantees and loans for things like affordable housing, accessible child care and more.

Author: Peter Cantelon, Executive Director In a diverse and ever shrinking world such things as ethics and values can be a tad difficult to grasp in any clear-cut way. This is not necessarily a bad thing. When you have to engage with a thought or an idea you come to better understand it and it… END_OF_DOCUMENT_TOKEN_TO_BE_REPLACED